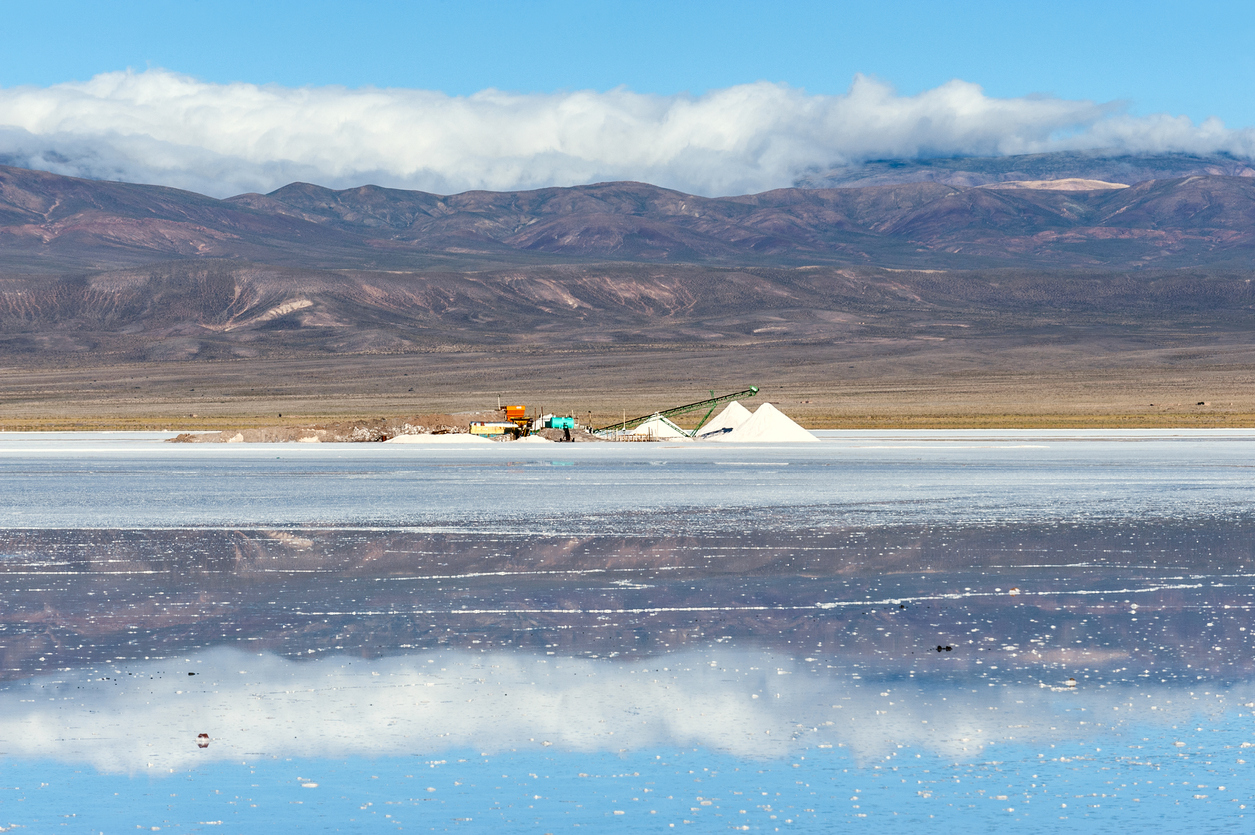 Demand for lithium continues to grow at a rapid pace. Due to its use for energy storage in lithium batteries, companies have been working to expand lithium mining and extraction to meet increasing needs for the mineral. Yet lithium is rarely found in high concentrations. Some of the most concentrated sources are subsurface brine deposits with 2.7 grams of lithium per liter of brine (Lithiummine 2021). Unfortunately, standard extraction methods are often invasive and damaging to local environments.

Approximately 70% of worldwide lithium reserves are found on indigenous lands in South America. As such, the rights of local peoples are often in conflict with the mining companies efforts to extract the mineral.

The Process of Lithium Extraction from Brine

The majority of lithium is extracted from underground brine deposits. While rock mines for lithium exist, costs of hard rock mining are typically higher than extraction from brine.

In order to extract the mineral from underground deposits, companies dig down to the groundwater level and pump the brine to the surface. Since concentrations of lithium in brine water are still not economically viable upon immediate extraction, the brine water is then left in huge surface pools. Overtime, sunlight evaporates the water, concentrating the lithium. And while the process is slow, due to minimal energy inputs, it’s cheap. After approximately two years of evaporation, lithium levels are concentrated enough for profitable recovery (Samco 2018).

The top lithium producing countries in order of production are Australia, Chile, China and Argentina (NSEnergy 2021). In South America, the “lithium triangle” with the richest brine deposits on earth includes Chile, Argentina and Bolivia. The area is native to indigenous populations that survive off the land, keeping goats and llamas and farming quinoa to scrape out an existence on the arid mountainsides.

And while lithium mining is creating billionaires, the local people receive almost nothing. Minera Exar is a Canadian company extracting lithium from the region. In a previously undisclosed document, it was revealed that the company is generating $250 million in profits per year while only paying the six local indigenous communities between $9000 and $60,000 annually (Frankel 2016).

One of the largest lithium mining operations, taken over by the Chilean dictator Augusto Pinochet in 1979, partnered with a U.S. company to expand production. Mining in the region extracted billions of dollars worth of lithium from the local indigenous people’s lands, yet paid them nothing up through 2015 (Frankel 2016).

Damage to the Environment and Local Communities

While local communities struggle to make an existence, the mining itself is threatening their way of life. The local climate is quite dry, receiving an average of only four inches of rain per season. Since lithium is found in underground brine deposits, local groundwater and brine is pumped to the surface where it’s left to evaporate. Local water supplies have been severely depleted and some communities have had to resort to bringing in potable water by truck. Each ton of lithium produced consumes 500,000 gallons of local water. In one region in Chile, mining operations used 65% of the region’s water supplies.

There are also concerns for waste products from mining causing environmental damage. The initial extraction of brine damages the landscape. In addition, evaporation pools can suffer from failure, releasing concentrated brine and chemicals back into the environment. This can contaminate the already limited local groundwater resources (Katwala 2018). Leftover concentrated salts and minerals from the evaporation process can also contaminate surface waters, making them unusable or toxic.

A Blessing and a Curse

While some local individuals fight against lithium mining, other locals fight for it. The mining companies usually hire at least some local workers and pay is often better than other employment opportunities. There has also been an influx of other resources, including medical and dental services to support the local mining operation’s employees and local residents.

With the ever increasing demands for energy storage, battery technology—with a heavy focus on lithium ion batteries—is often touted as a fundamental component for green technologies. For too long the environmental and social costs of lithium mining on local and indigenous populations have been ignored. While lithium battery technology is important for future energy production, cleaner methods of extraction and production are needed. In addition, local indigenous communities should be fully informed and properly compensated for mining on their lands.

Frankel T, Whoriskey P. Companies are making billions in lithium mining. But these indigenous people are being left out. Washington Post. Published 2016. https://www.washingtonpost.com/graphics/business/batteries/tossed-aside-in-the-lithium-rush/